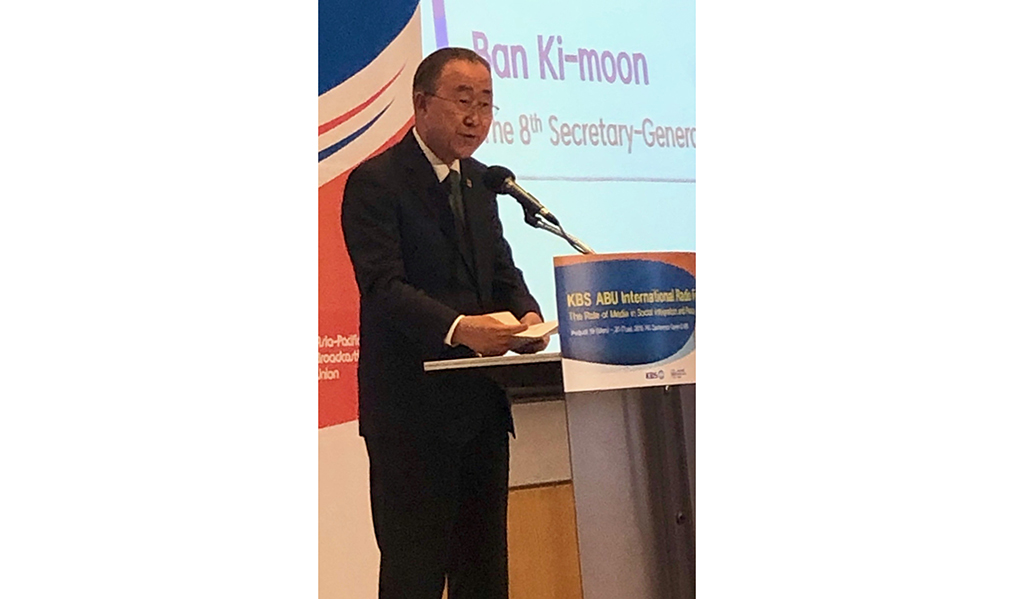 Former UN Secretary-General Ban Ki-moon delivered a keynote address at an ABU-KBS conference on the role of the media in peace-building.

Speaking at the opening of the two-day conference in Seoul, South Korea, he said at a critical time in our collective future he was confident the forum would go a long way to instilling greater knowledge about media’s role in reconciliation and peace.

Experts from Korea, the rest of the Asia-Pacific and around the world attended the two-day conference on “The Role of Media in Social Integration and Peace”, hosted by the Korean Broadcasting System KBS, an active and leading member of the ABU.

Mr Ban spoke of the peace-building record of the United Nations and said the media were also important because they were the messengers and connectors in an interconnected world. It was important these messages connected the right people in the right way when there was a rise of nationalism globally and multilateralism was lamentably under threat.

“Media tells local stories, raises awareness of ongoing peace and reconciliation efforts, holds those in power accountable and spurs greater political participation,” he said. “In addition, it helps inform and amplify the voices of often marginalized communities such as women, refugees, and young people.”

He said it was a proven fact that higher levels of gender equality and the empowerment of and education for women and girls leads to higher levels of peace and integration. Peace was 35% more likely to hold if women were sitting at the decision-making table.

“Give voice to the voiceless,” he urged. “Cover peacebuilding issues in post-conflict societies. Tell stories that enhance social integration. Collaborate with and support local communities and journalists, including women and youth.”

Mr Ban called on the ABU to expand its work on peace and reconciliation and he hoped the Union continued to work with KBS and all broadcasters in Korea towards transformational developments in the Korean Peninsula.

He added that, in order to achieve peace and reconciliation, all sectors needed to join together in partnership.

“With your active and sustained efforts in support of the truth, the public, and the UN, I am confident that our world will flourish and be peaceful and sustainable for the next generations and beyond.”