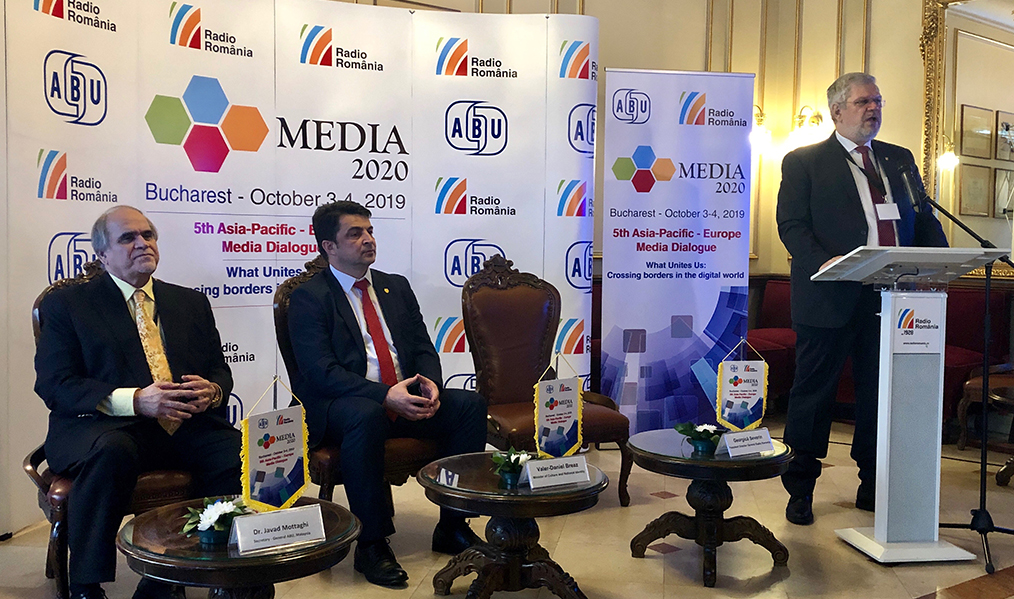 The media have a great duty to strengthen trust between people, welcome diversity and end conflicts between “us” and “them”, delegates of the ABU East-West media dialogue have been told.

He stressed to the more than 80 delegates from 20 countries, that the importance of the media transmitting correct information, not fake news, which had a very negative impact on people. He said the issue of copyright was also very important to Romania to protect the creators of intellectual property, and his country was working to support the directive on copyright in the European Commission.

He said it gave him great pleasure to see so many media people at the conference, making connections and working together to combat disinformation and other issues, fostering understanding and cooperation between east and west.

“Despite all these uncertainties, I believe the media can strengthen dialogue among nations to make the ‘other’ a part of ‘us’.

“Audiences need impartial, independent, accurate and reliable news and current affairs. They depend on us and media professionals if we tell the truth to our audiences and if we can win their trust.”

said that since its inauguration in 2015, Media 2020 had opened a new communication horizon between the Asia-Pacific and Europe in the field of broadcasting.

“One edition after another, we have learned to look together at the future,” he said. “Focusing on what unites us and on our common goals has been one of the major gains of this conference so far. This is why we have chosen to focus at the current edition on the theme ‘What Unites Us: Crossing Borders in the Digital World’.

“In a global context where we all must face a series of common difficulties, starting from political and economic issues to the new digital age, sharing our experiences and good practices is a must; it is my strong belief that only together we can overcome them.”

The conference to promote dialogue between Europe and the Asia-Pacific is hosted alternate years by Romania and an ABU member country. The year 2020 was initially chosen as a target year and Dr Mottaghi said he hoped the series could continue for many years to come –  “though perhaps after next year the name will have to change as we set a new path into the third decade of the 21st Century”.

The debate sessions focused on the future of public media in the digital era, strategies to protect copyright and fight fake news, adapting radio to the new digital context, 5G technology, promoting cultural diversity and collective memory between the East and the West.

During the conference, Radio Romania and BBC Radio signed a bilateral agreement to develop a creative cooperation partnership between the two broadcasters, involving the exchange of ideas and good practices, common solutions to fight disinformation, capitalising on modern storytelling, tighter cooperation and creative solutions to attract new generations to public media. The agreement follows those already signed between Radio Romania and Radio France and RAI, Italy.

The next Media2020 Dialogue will take place in June 2020, hosted by Radio Republic Indonesia (RRI) in Bali, Indonesia. The event will follow the ABU RadioAsia conference and the ABU Radio Song Festival.