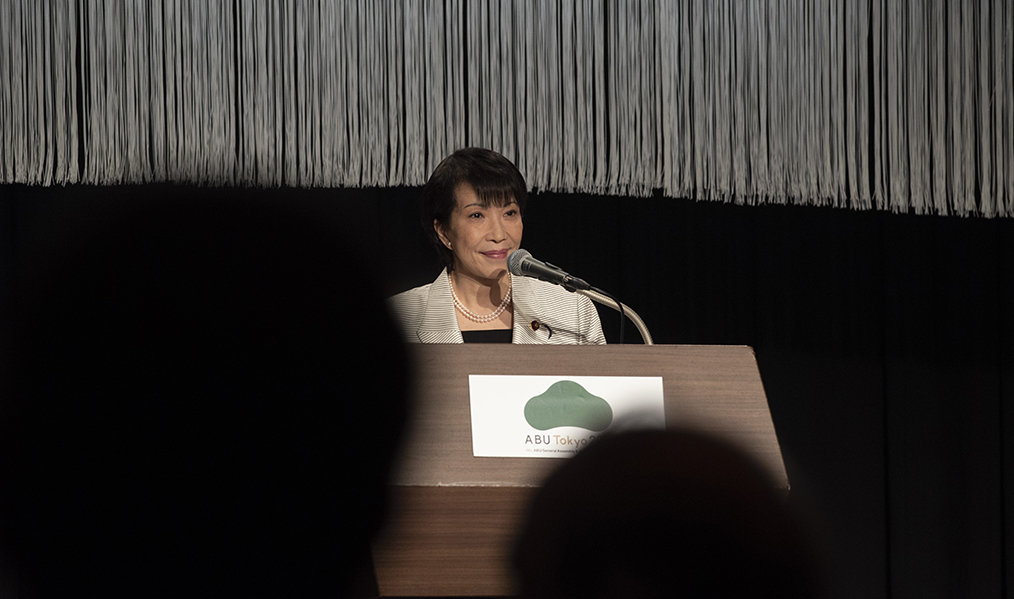 The official Opening Ceremony of the 56th GA was formally opened to a full hall of delegates in Tokyo. A video was shown showcasing the start of the ABU in the same year as the last Tokyo Olympics in 1964. Ms. Miki Yamamoto, NHK Anchor addressed the audience and introduced Ms. Takaichi Sanae Minister of Internal Affairs and Communications of Japan, who addressed the audience in Japanese and greeted all to the GA.

She outlined the significant achievements the ABU has achieved over the years and its successes in rights negotiations, technology and global cooperation towards the benefit of its members. She  then explained how the internet has had an increasingly important impact on broadcasters and has necessitated great change on how broadcasting is done. She praised broadcasters for their efforts in Disaster Relief and Prevention. She highlighted the multiple typhoons experienced in Japan and how radio has helped in these situations.

Mr Ueda Ryoichi,  NHK President and ABU President then made the keynote address and welcomed all delegates to Tokyo and to the GA. He started off by introducing the then=me of the GA and expanding upon its meaning stating: “In recent years, the environment of the broadcasting industry has changed dramatically due to the digitalization and the rise of the Internet. New platforms utilizing the Internet are rapidly emerging, and social media has become significant means of communication.”

Dr Javad Mottaghi, Secretary General of the ABU then took the stage and greeted and addressed the audience by expounding upon the new media landscape: “Constant change seems to be the new normal. And ABU members across the globe have to keep adapting to changes driving the broadcast industry – adapt to new technologies, to new disruptive use of technologies for information dissemination, adapt their resources, adapt their workforce and most of all, change how they serve their audiences.”

A visually-stunning, high technology performance featuring dancers in traditional and contemporary costumes, which seamlessly encapsulated the themes of diversity and unity, which are both representative of the ABU, followed for the entertainment of those present.

And with that, the GA officially opened!