The Asiavision Annual Awards recognise excellence in journalism by Asiavision members. All items uploaded by members from June 1 to May 31 each year are eligible. The awards are presented at a gala event at the annual Global News Forum.

Outstanding Coverage of a Breaking News

Outstanding Coverage of a News Event

Outstanding Visuals for a News Story

Outstanding Reporting for a News Story

Outstanding Reporting from a Small Newsroom

Outstanding Coverage of a News Event

Outstanding Vision in a News Story

Outstanding Reporting for a News Story

Outstanding Reporting from a Small Newsroom

This category is open only to small newsrooms. Members assess eligibility themselves but entries may be disqualified if the organisation’s operational scale is deemed inappropriate for this category.

The judges will also consider the overall quality of the script and vision.

All winners: Winners and presenters pose for photo at the Asiavision Awards Gala, held in New Delhi, India.

NHK’s coverage of the Tokyo Summer Olympics won the top prize at the 2022 Asiavision Awards Gala for excellence in journalism.

Produced under strict pandemic prevention measures, NHK’s coverage of the Tokyo Olympics won the Coverage of the Year award. NHK also won the award for “Outstanding Coverage – International” for its coverage of the Russian invasion of Ukraine and nabbed four more nominations.

TVB-Hong Kong won Outstanding Reporting – News Story for a third consecutive year. Their report on the removal of a protest monument at Hong Kong University was the joint winner with Thai PBS-Thailand’s story on exposing a scam call centre in Cambodia.

A new category was introduced in 2022 in recognition of the individuals who support the news exchange with extraordinary commitment. The Director’s Award for Outstanding Commitment to Asiavision went to Prasad Kaushalya Dodangodage, Head of the English Desk at SLRC-Sri Lanka, for his years of service to Asiavision and his contributions to the video news exchange, even at the height of the protests in Colombo.

The Taliban returns to Kabul – IRIB-Iran 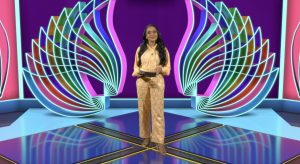 Asiavision Annual Awards 2021 celebrate the best of the past year!

The ABU News Department’s set of premier events came to a fitting conclusion on Friday, October 29, with the annual celebration of the best of the best contributed by Asiavision Members over the last year. The Facebook live-stream of the Asiavision Annual Awards 2021 followed two days of NewsGroup Webinar Meetings for both Pacific and Asian Members.

With around 17,000 news stories eligible for the 2020-21 season, prizes were presented in seven categories, along with the Award for Coverage of the Year. This year, a category for Outstanding International Coverage was introduced to recognise the many stories of global importance that Members increasingly contribute through their correspondents based outside their home countries.

The 2021 Award for Coverage of the Year goes to VTV Vietnam, for their excellent coverage of the COVID-19 Pandemic. This included pandemic prevention and daily updates as well as a vast array of economic, social, technological, and human-interest stories that showed a comprehensive picture of how individuals, businesses, small communities and the country as a whole were battling the pandemic.

The annual gala event celebrating the best of Asiavision Member contributions for 2019/20 was live streamed on January 27. Members were recognised in seven different categories, including two new awards – Climate Change and Pacific Reporting, along with Coverage of the Year for COVID-19 reporting.

The Awards showcased the scope, the depth and the breadth of the thousands of news stories shared by Members on the Asiavision platform.

Outstanding Reporting of a News Story:

Outstanding Visuals for a News Story:

Outstanding Reporting from the Pacific:

Outstanding Coverage of a News Event:

There were more than 100 entries for this year’s Awards. ABU Director News Wendy Everett said it was gratifying that Breaking News Coverage was the most competitive category with the judges considering eight nominations.

“The competition for the Breaking News category shows the value of Asiavision’s news exchange during breaking world events’” she said.

“The Awards themselves showcased best practice and are a wonderful window to the work of the ABU’s News Department and Asiavision Members.” 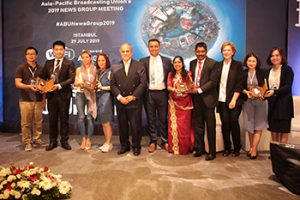 The Awards were presented in three categories at the Closed Session of the 2019 Asiavision News Group Meeting. The winners:

There was a tie between SLRC of Sri Lanka and VTV of Vietnam for the Best Breaking News award.

SLRC won for its coverage of the Easter Sunday bombings in April 2019. With up-to-date information shared to all Members within an hour of the first blasts as well as follow-up vision from the massacre and information in the months following.

VTV won for its prompt and extensive up-to-date coverage of the historic meeting between the Leader of DPRK Kim Jong Un and United States President Donald Trump that took place in Hanoi, Vietnam in February 2019.

CCTV won the Best Story award for its comprehensive coverage of the series of news stories shared with Members on the state visit by Chinese President Xi Jing Ping to the Democratic People’s Republic of Korea in June 2019. The vision and accompanying scripts exemplified the spirit of the importance of an exchange program like Asiavision.

With stunning visuals of the Turkish Mountainside, TRT won the Best Vision award for its story on the daily journey of shepherds to the high peaks of Mount Nemrut on a tough, gruelling trek to graze their sheep. The beauful landscapes and breathtaking aerial footage accompanied by the powerful human story of survival won the prize for TRT.

The entry period for next year’s Awards is from July 1, 2019 to May 30, 2020. An additional category “Best News Coverage” is being introduced for the 2020 Asiavision Awards. As well, the rules and criteria will be revised to include deliberations and suggestions from Members at the 2019 News Group Meeting. These revised rules will be communicated to Members in the coming months.