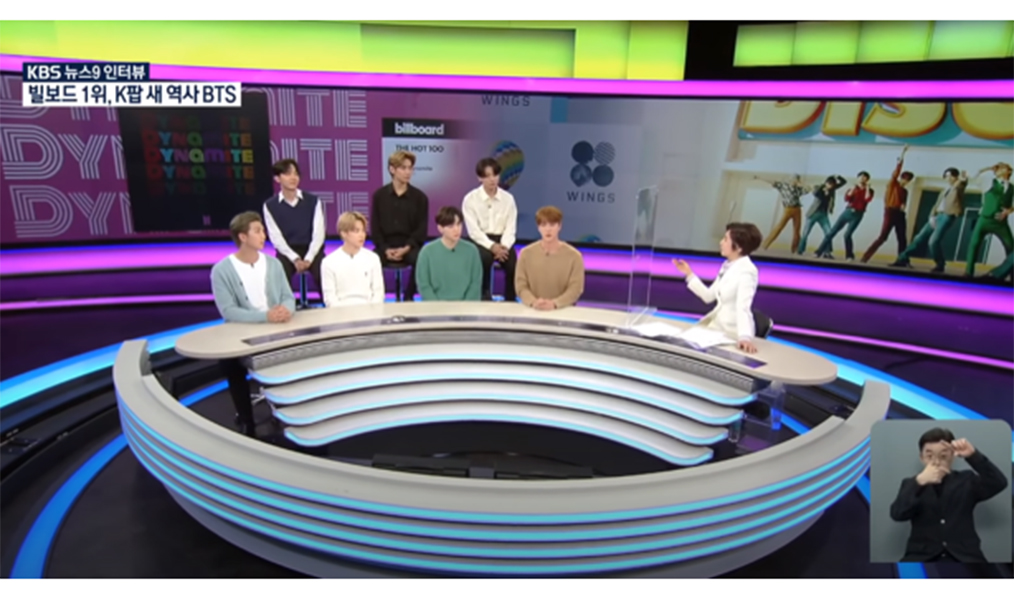 The world’ most beloved boy band has won No.1 on the U.S. Billboard 100 singles chart for two consecutive weeks for the disco-pop “Dynamite”, the first song performed completely in English by BTS.

The first-ever female prime-time news anchor Lee So-jung, for the nation’ most watched ‘News 9’, led the special interview with the seven-member Korean pop act. It is the first time for the hugely successful artist group to appear physically on the Korean media after achieving the splendid feat.

In the rare interview, the BTS members were grateful to have the chance to celebrate the historical milestone with audiences of KBS at home and abroad, by sharing their personal significance and gratitude towards their fans.

In response to the first question by Lee So-jung about the group’s feelings about the latest triumph, BTS said that; “We don’t feel real at all. When something good like this happens, we should be meeting the fans in person and hug, cry, and celebrate together. It’s a shame because of the current situation. But it’s an honor to be here on KBS. I hope the fans will be happy”.

Lee carried on with a question about the remarkable response to “Dynamite” and BTS elaborated that; “The situation isn’t good in Korea and overseas. When we first came up with this song, we wanted to provide strength for our fans. And fortunately, our fans really love the song. I believe that’s probably the reason behind the amazing outcome”.

Also, the seven-member band explained about why they chose the disco music, and expressed that; “It’s a really exciting and funky disco track. In these tough times, when you’re feeling down and depressed, there are many ways to relieve that. We chose to go with our field of expertise. It’s a disco-pop that everyone is familiar with. We wanted it to be cheery. And we felt like we needed something that is hopeful”.

In relation to the new album, BTS said that; “We have other songs as good as “Dynamite” and some even better, so please look forward to it. Our members have been heavily involved in the production”.

Anchor Lee So-jung also asked BTS about the anticipated goal to win at the Grammys, and they stressed that; “We would like to be nominated and present an exclusive performance at the Grammys. We even have a dream to win a Grammy”.

The KBS’ special interview with BTS on 10th September has been watched by numerous BTS fans across the world. KBS delivered all the updates on BTS for the day including their first arrival at KBS headquarters via assorted YouTube streaming platforms of KBS such as ‘KBS News’, ‘KBS 한국방송’, ‘KBS World’ as well as ‘TikTok’(KBS News), ‘KakaoTV(KBS 24 News)’ and myK. Especially, the YouTube channels of ‘KBS 한국방송’ and ‘KBS World’ have enjoyed accumulated views of more than 940,000 and 840,000 respectively. (as of 10th Sep. 7pm KST).