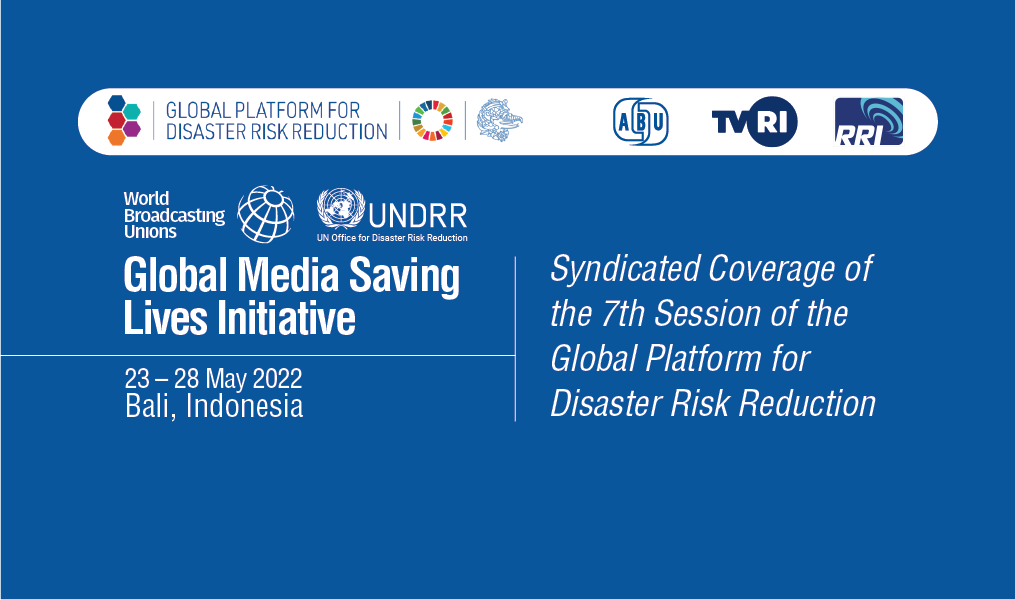 The ABU is organising world-wide coverage of the 7th Global Platform for Disaster Risk Reduction to be held from 23 to 28 May 2022 in Bali, Indonesia.

A team of 15 journalists from the Asia-Pacific, Arab, African and Caribbean regions will provide a daily feed of news, reports and interviews.

The journalists were nominated by members of the World Broadcasting Unions (WBU). In Bali the team will work closely with the ABU members in Indonesia, TVRI and RRI, who are designated as host broadcasters by the Indonesian government.

The WBU joint effort will guarantee a massive global, regional and national distribution of stories in at least three main languages (English, French and Arabic) through the Unions’ networks of over 200 national broadcasters.

The Global Syndicated Coverage is initiated by the ABU as part of the WBU/UNDRR Media Saving Lives initiative. This unique collaboration recognises media as a trusted partner in Disaster Risk Reduction, globally covered by a pool of WBU TV reporters duly selected by the WBU.

The Global Platform (GP2022) for Disaster Risk Reduction (DRR) is the world’s foremost gathering on reducing disaster risk and building resilience of communities and nations. It takes place every two years. The first global platform was held in 2007.

The GP2022 agenda will be guided by the Sendai Framework goals, priorities for action and targets, the key priorities identified at the previous Global Platform held in Geneva, Switzerland in 2019 as well as those stemming from the Regional Platform meetings.

As for the host country, Indonesia is exposed to a wide range of natural hazards, including earthquakes, tsunamis, volcanic eruptions and flooding.

The government of Indonesia has been at the forefront of disaster and climate risk management through constant adaption of its laws, policies, and institutions. National agencies plan for and respond to disasters effectively with improved tools, data and capacity. Indonesia is committed to implementing the Sendai Framework for Disaster Risk Reduction and to strengthening disaster resilience nationally and globally.