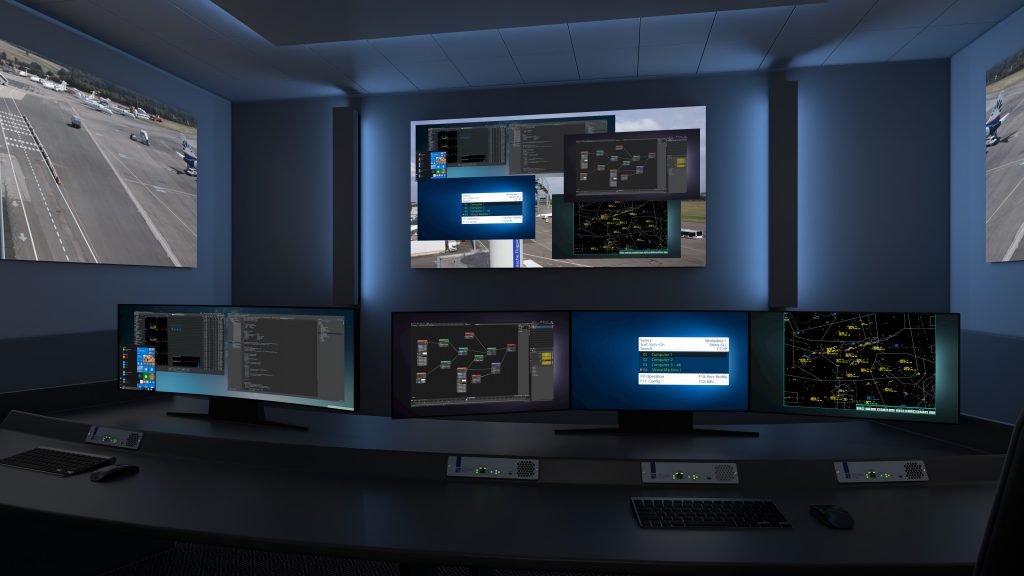 With their ControlCenter-Xperience, Guntermann & Drunck (G&D), leading manufacturers of KVM systems for control room applications, announce a showroom to present their cutting-edge KVM equipment. The name refers to a permanently installed control room that can be used to show customers how G&D KVM equipment works in a live application.  Following the motto “Experience KVM like never before”, the company promises a breathtaking 360° experience. From October 1, 2020, visitors will be able to experience first-hand how KVM systems perfectly interact with different applications. On top of this, they will get a live demonstration of how G&D’s KVM systems and their intelligent control options can be optimally integrated into a control room installation.

Added value for customers and partners

In the ControlCenter-Xperience , G&D will present their equipment on site – but also remotely via live video. In the future, the company will be able to offer its customers and partners a platform for personal live consulting on a real control room application and present its comprehensive product range in action, independent of time and place. This way, customers will not only benefit from G&D’s know-how, but can also book individual live or remote tours fitting their projects.

What visitors can expect

The ControlCenter-Xperience showcases a complete control room setup from which any computer equipment has been moved to a separate technology room. The main focus here will be on the interaction of both the most diverse systems and technologies and customers or partners and the company as a consultant. Among other things, visitors can experience user-friendly functions for perfect control room applications, intelligent control options via API, and solutions for optimal control of video walls. All of this and much more will be available in G&D’s new ControlCenter-Xperience.

The grand opening of the showroom will be on 1 October 2020. Reservations for live demos can already be made. For more information and to make an appointment go to https://xperience.gdsys.com

NHK has just launched its IBC Showcase exhibition site and invites you to take part in its initiatives toward future media.

The link to the NHK IBC exhibitor page is

IBC is partnering with some of the biggest names in the media and entertainment sector to deliver the event.  It includes virtual conference sessions, product demonstrations, exhibitor listings and workflow tours.

Radio has played a tremendously important role since the outbreak of Covid-19. Despite the significant challenges faced by many broadcasters since the start of the pandemic, radio listening is peaking, new DAB+ services are being launched across Europe and the WorldDAB network continues to grow.

In Norway, the first country to have switched off national FM, listening numbers grew significantly over the summer months, with the month of July recording its highest listening figures to date – 400,000 more than in July 2019.

In the UK, listening via DAB now accounts for 40% of all listening and 69% of digital listening, and 67% of the population is now tuning in via a digital platform.

Switzerland is preparing for a digital switch over, with FM to be switched off no later than 2024. DAB+ recently became the most popular listening platform and now accounts for 37% of all listening, while 68% of all listening is on digital platforms.

The EECC directive, which comes into force at the end of 2020 and will require all new cars across Europe to include digital radio capabilities, will further boost DAB+ listening.

DAB+ continues to allow broadcasters to innovate by launching new radio services, with numerous station launches taking place in recent months, and more to come in the near future.

Germany will see the launch of a second national multiplex in October 2020 – bringing 16 new DAB+ commercial radio stations to listeners across the country.  In France, where DAB+ is already on air in nine major cities, the large commercial radio groups and Radio France will launch national DAB+ in 2021.

The WorldDAB network has continued to grow throughout 2020, with 12 new members from 10 different countries joining in the last 12 months – three of which since May:

Other members that have joined the WorldDAB network over the last 12 months include:

WorldDAB now has a total of 106 members from 32 countries.

The Digital Radio Mondiale (DRM) Consortium will to continue the IBC tradition by hosting a “townhall” virtual event to which all Asia Broadcasting Union members are invited. The two hour session called “DRM – Advanced Radio for All” will take place on:

9th September 2020
1000 – 1200 UTC
At this DRM event some of its members and affiliates will showcase their latest DRM developments, products and technical advances. This is an excellent opportunity to get the latest DRM updates or simply ask questions and connect with the worldwide DRM family.

Please confirm your participation to the DRM Consortium by 4th September 2020 to receive your free participation link/code to projectoffice@drm.org.

If you are wondering if India is still in focus for DRM,  please read  Mr Yogendra Pal’s commentary in Radio World, just off the press:

DRM FOR FM – MEASURES UP TO EXPECTATIONS IN INDONESIA

Radio stations in Bangladesh and Malaysia have joined hands to serve the Bangladeshi community in Malaysia.

The app can be downloaded for free via Google Play or the App Store. BONDHU is also available at www.bondhu.com.my/ and on Facebook at www.facebook.com/bondhu.my/

Jeyapuvan Somasundram, Vice President, Astro Media Solutions said: “We are pleased to be the exclusive local representative for BONDHU in Malaysia, offering engaging content for our local Bangladeshi community through immersive dialogues and relevant updates.

“At the same time, BONDHU offers advertising and sponsorship opportunities for businesses to reach and engage with the Bengali speaking community which is largely an untapped segment in Malaysia.”

Rafiqul Haque, Managing Director, Radio Today, said: “We are pleased to bring both entertainment and news content tailored for Bangladeshis living in Malaysia, designed to keep them in touch with information from Malaysia and back home.

“On top of entertainment, BONDHU’s content also includes public service announcements, health and safety updates, and other social messaging. We hope this effort will bring meaningful benefits for the Bangladeshis living in Malaysia.”

Kuala Lumpur, 2 December 2019 – MEASAT Satellite Systems Sdn. Bhd. (“MEASAT”) celebrates a back-to-back win as it announced today that Vinothan Nadarajah, MEASAT’s Assistant Manager, Business Development and Strategic Planning was selected as the winner of the 2019 Asia-Pacific Satellite Communications Council (“APSCC”) Young Talent Award. This is the second year in a row that MEASAT was recognized in developing some of the brightest talent for the development of future technology leaders.

Vinothan, a rising talent with 11 years of experience in the satellite communications industry was acknowledged at the organization’s third Young Talent Award at the Intercontinental Hotel, in Bangkok, Thailand, as part of the APSCC’s 2019 Satellite Conference and Exhibition. The award, presented by Gregg Daffner, President of APSCC, on 21 November 2019 recognizes Vinothan’s contribution and achievements in leading the initiatives of Malaysia’s first satellite-based consumer broadband service, which enabled thousands of unserved Malaysian to receive broadband connectivity for the very first time.

The APSCC Young Talent Award is part of the APSCC efforts to ensure a healthy future for the satellite industry and to attract and retain young talent. The Award is presented to give the best of the young staff encouragement and public recognition of their contributions to the Asia- Pacific satellite and space community.

Kuala Lumpur, 15 October 2019 – MEASAT Satellite Systems Sdn. Bhd., (MEASAT), in partnership with Globecast, has announced today that BBC Studios, the commercial arm of the BBC, has renewed its agreement to distribute its BBC channels across Asia via the MEASAT-3 satellite.

“We are delighted to continue the partnership with Globecast, supporting BBC Studio’s channel distribution across Asia,” said Yau Chyong Lim, Chief Operating Officer, MEASAT. “This service extension with MEASAT and Globecast shows the strength of our 91.5°E video neighbourhood for broadcasters.”

The channels include BBC Earth HD, which inspires audiences by sharing the incredible wonders of the universe; CBeebies HD, which provides pre- school age programming to encourage learning through play; and BBC Lifestyle Asia, which provides a wealth of inspiration for home, family and life.

Shakunt Malhotra, Managing Director, Globecast, said, “We have a longstanding, productive partnership with MEASAT in Asia, delivering channels across the region and we are pleased that BBC Studios has chosen to renew their services with us.”

“With MEASAT and Globecast, we have found strong and reliable partners for the distribution of BBC channels into Asia,” said Shad Hashmi, SVP, BBC Studios. “MEASAT and Globecast have addressed our business needs and we look forward to continue partnering with them in the years to come.”

MEASAT-3 is collocated with the MEASAT-3a and MEASAT-3b satellites at Asia’s prime video hot slot of 91.5°E. The three satellites form the region’s strongest video neighbourhood, providing UHD, HD and SD channels across Asia, Australia, East Africa and Eastern Europe. The MEASAT fleet will be further strengthened with the addition of MEASAT-3d in 2021.