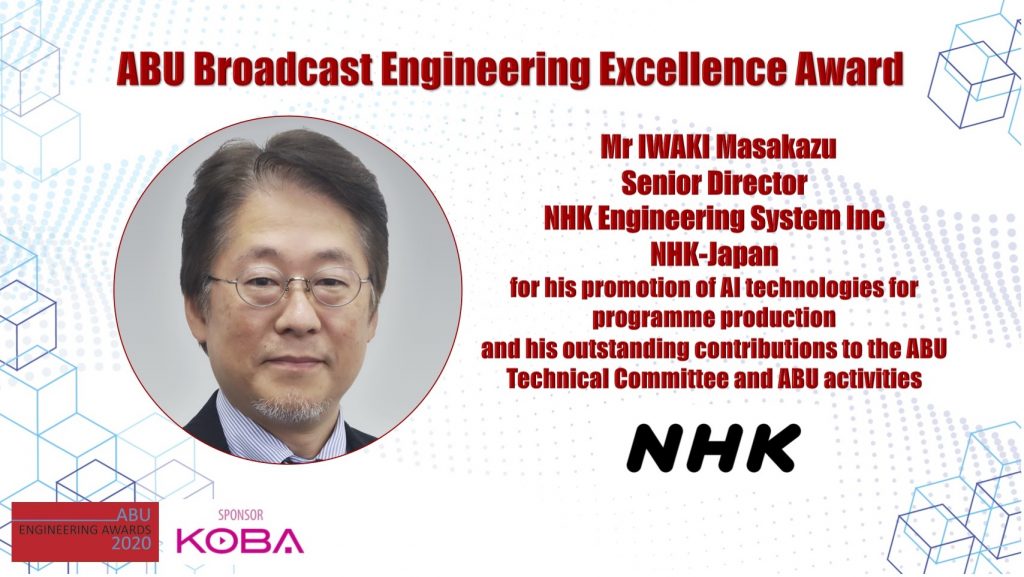 The ABU Broadcast Engineering Excellence Award, which recognises contributions of an outstanding nature in broadcast engineering made by an individual in a broadcasting organisation was awarded to Mr Iwaki Masakazu of NHK-Japan.  Mr Iwaki is Senior Director at Senior Director of NHK Engineering System Inc and won the award for his promotion of AI technologies for programme production and his outstanding contributions to the ABU Technical Committee and ABU activities. Expressing his gratitude, Mr Iwaki told the meeting he had spent most of his career as a research engineer at the NHK Science & Technology Research Laboratories (STRL).  He recalled that his first research and development project had been to develop an ice-zone microphone system to pick up the sound of ice skating. The system had been used at the Nagano Winter Olympics in 1998.  Mr Iwaki said he had recently managed the promotion of the effective use of AI technologies for programme production. The laboratories were focusing on the AI transcription system, AI announcer, AR/VR technologies for sports events and so on.  Mr Iwaki held important posts in the ABU Technical Committee for more than a decade. These included transmission topic chairman, vice chairman and chairman. The ABU Engineering Industry Excellence Award, which recognises the most outstanding engineering contribution made by an individual to the broadcasting industry in the region, was awarded to Ms Zhang Hong, Director General, Radio and Television Administration of Guangxi Zhuang Autonomous Region, RTPRC-China who won the award for her outstanding leadership of the broadcasting industry of Guangxi Zhuang Autonomous Region.

Ms Zhang Hong thanked the ABU for recognising China’s Smart Broadcasting project and her work and for giving her this great honour.  She said the honour also belonged to the policy projected by NRTA-China and the leadership of the government of Guangxi and the teamwork of the Guangxi broadcasting group.

Ms Zhang Hong said that for two years, difficulties had been overcome by working diligently to use all resources available to keep the mission firmly in mind.  Smart Broadcasting was creating not only a non-contact economy pattern but also a non-contact way of living.  “What is in front of us is not only television but also the infinite wisdom of humankind.” The ABU Green Broadcast Engineering Award recognises outstanding contributions in developing, implementing and/or promoting green technology in the broadcasting industry.  The 2020 winner was the Radio, Film & TV Design and Research Institute, China who won the award for promoting environmental protection measures and green initiatives in the design and construction of the Guangzhou TV Tower.

Mr Pan Guolin on behalf of DRFT said the award was an honour for every participant in the project. DRFT had undertaken almost all the design works of China aid projects and domestic projects related to radio and TV.

He said DRFT would accept the award as an opportunity to strengthen technological capacity and would continue to contribute to the Chinese development characteristics and ecological concept of green environmental protection in modern architecture in China.

There were no nominees for the ABU Developing Broadcasters’ Excellence Award this year. Three prizes were presented each from the categories of Practical Implementation, Research and Case Studies. The Best Article on Research was co-authored by Dr Kazuyoshi Shogen of B-SAT, Japan and Mr Thong Pham Viet of ITU-R.  Their article titled Effectiveness of Frequency Sharing Criteria in the Broadcasting Satellite Link appeared in the October-November-December 2019 issue of the ABU Technical Review. 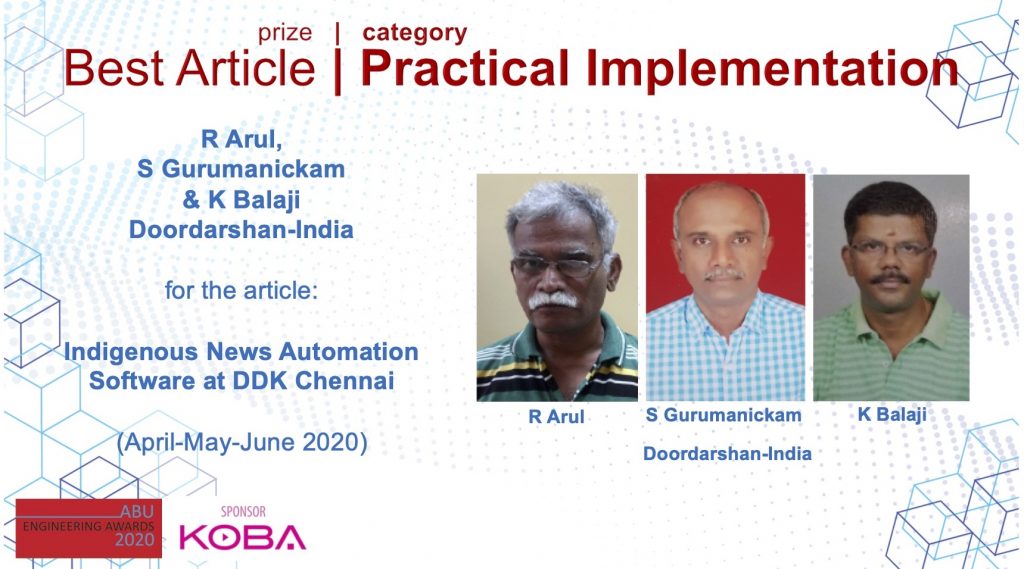 The winners for the Best Article on Practical Implementation are Mr R. Arul, Mr S. Gurumanickam and Mr K. Balaji of Doordarshan India who co-authored the article titled Indigenous News Automation Software at DDK Chennai which appeared in the April-June 2020 issue of the ABU Technical Review. 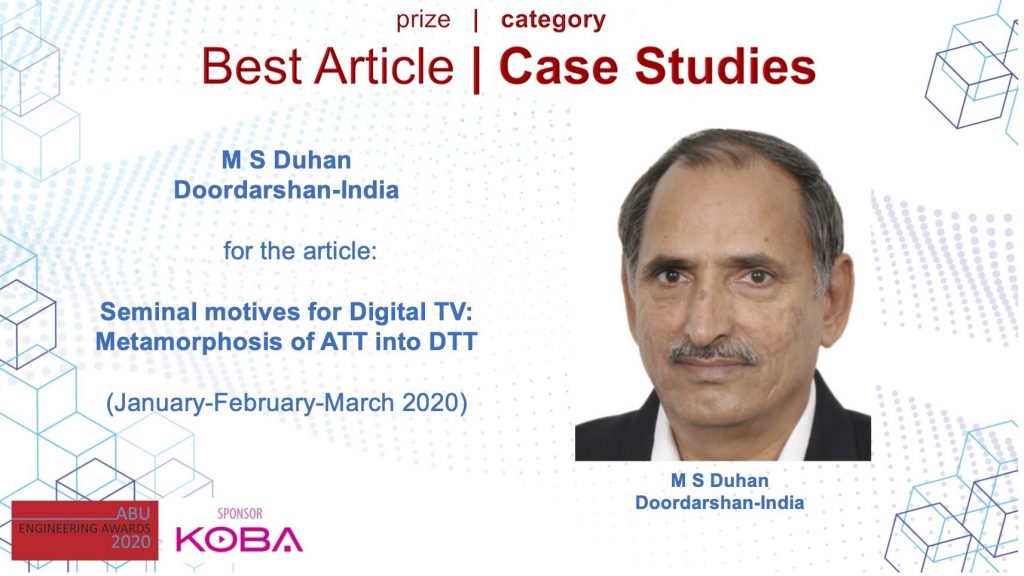 The winner of the Best Article on Case Studies is Mr M S Duhan of Doordarshan-India who authored the article titled Seminal motives for Digital TV: Metamorphosis of ATT into DTT, which appeared in the January-March 2020 issue of the ABU Technical Review.

And the 2019 ABU Engineering Awards Winners are……. 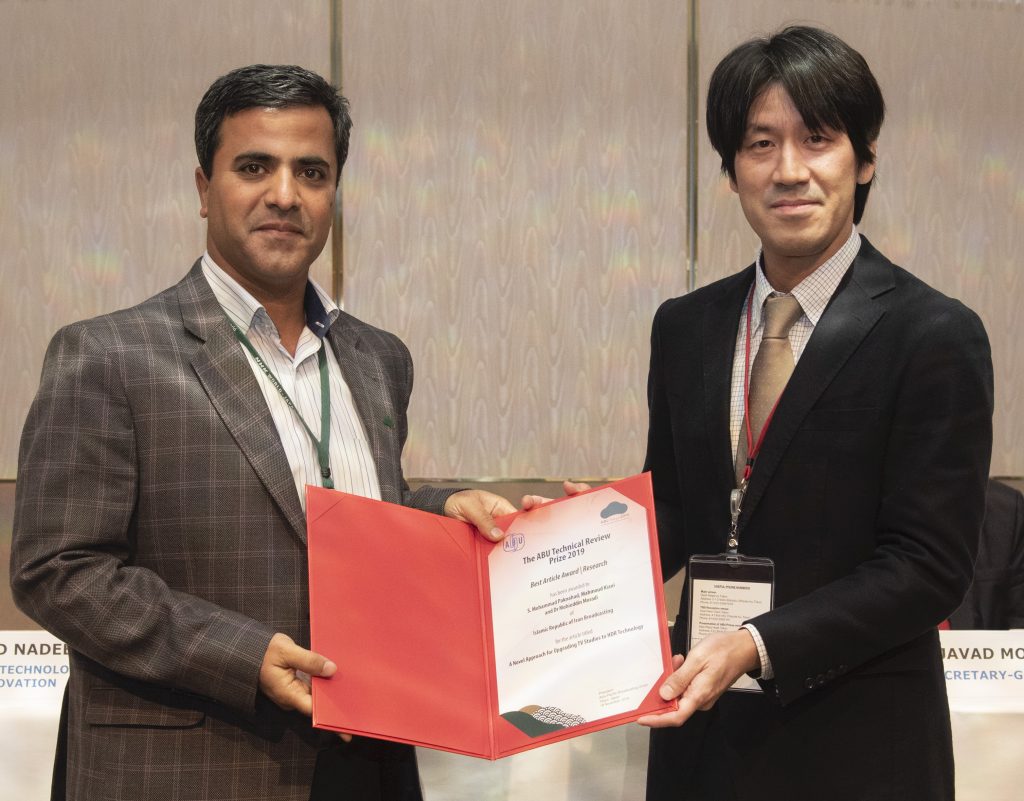 The Best Article Prize winner under the Research category was awarded to Mr Mohammad Paknahad, Mr Mahmoud Kiani, and Dr Mohieddin Moradi of IRIB-Iran for the article titled “A Novel Approach for Upgrading TV Studios to HDR Technology” which appeared in the July-September issue of the Technical Review Magazine. Mr Masashi Kamei, Vice Chairman ABU Technical Committee and Senior Research Engineer, Science and Technology Research Laboratories, NHK, presented the certificate to Mr Hamid Nayeri, ABU TC Chairman, to accept the certificate on behalf of the authors. 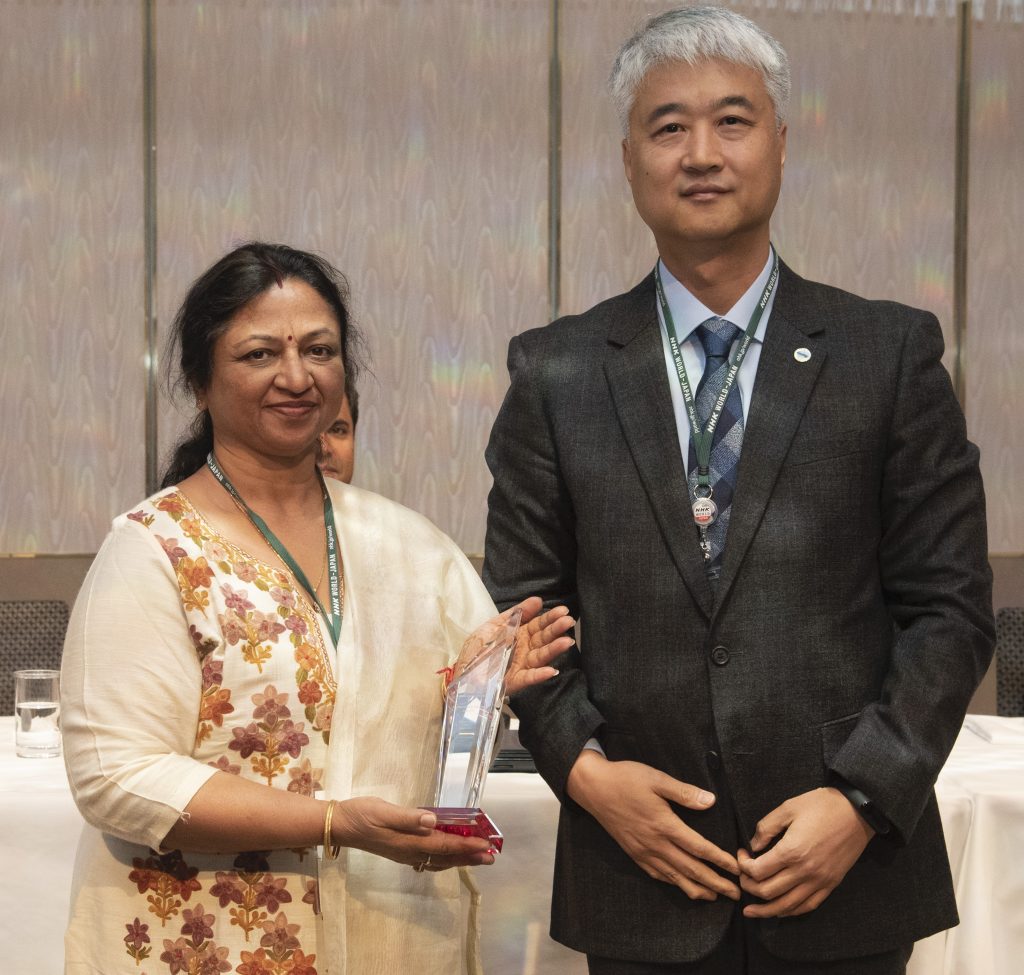 All India Radio won the award for adopting green technologies throughout its digitalisation process and promoting awareness of climate change within these projects.  Ms. Anuradha Agarwal, ADG (Engg), DD-India accepted the award on behalf of All India Radio. 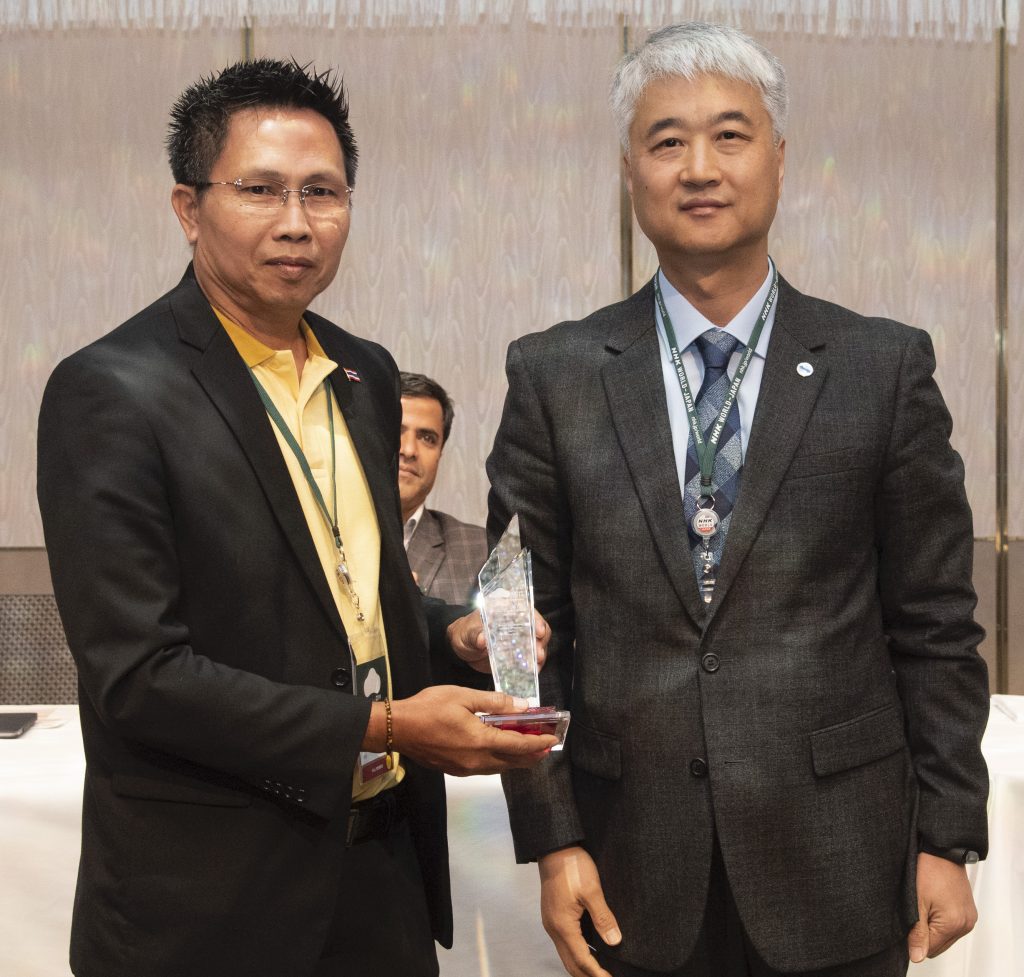 The National Broadcasting Services of Thailand (NBT) won the award for their efforts in promoting the protection of the environment throughout its digital transition projects.  Mr Kachan Kannika accepted the award on behalf of NBT-Thailand
ABU Developing Broadcasters’ Excellence Award | For contributions of an outstanding nature in broadcast engineering made by an individual in a developing broadcasting organisation. 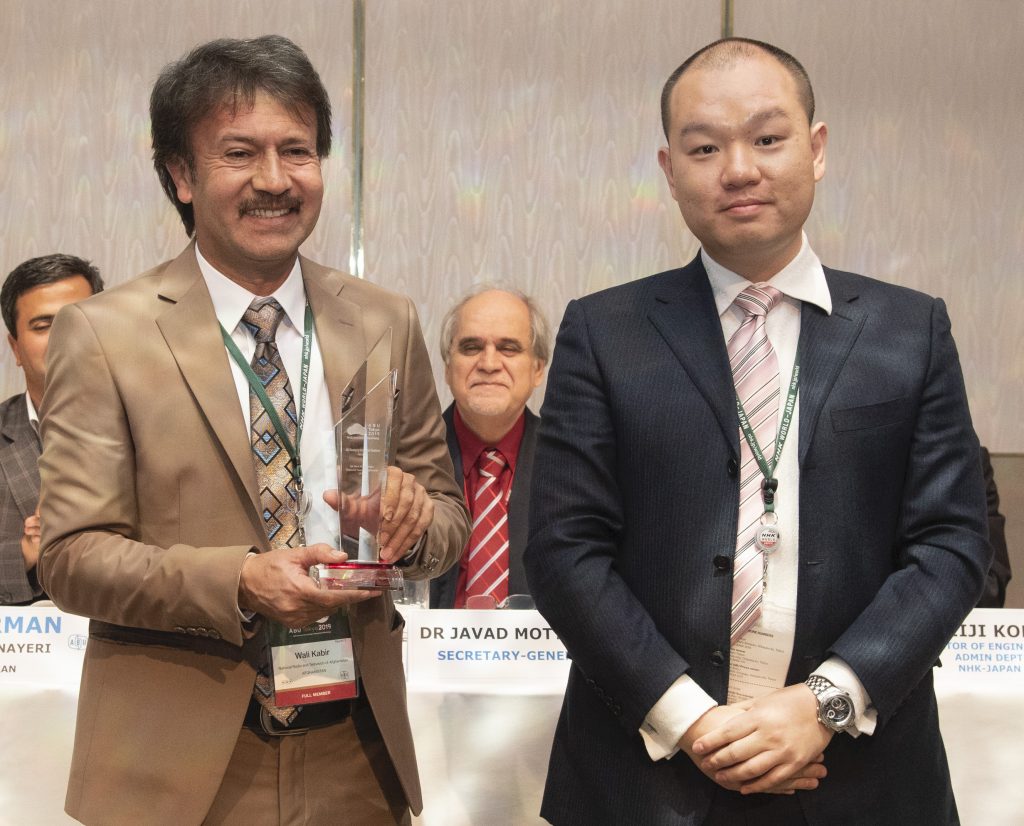 ABU Engineering Industry Excellence Award | For outstanding engineering contributions made by an individual to the broadcasting industry. 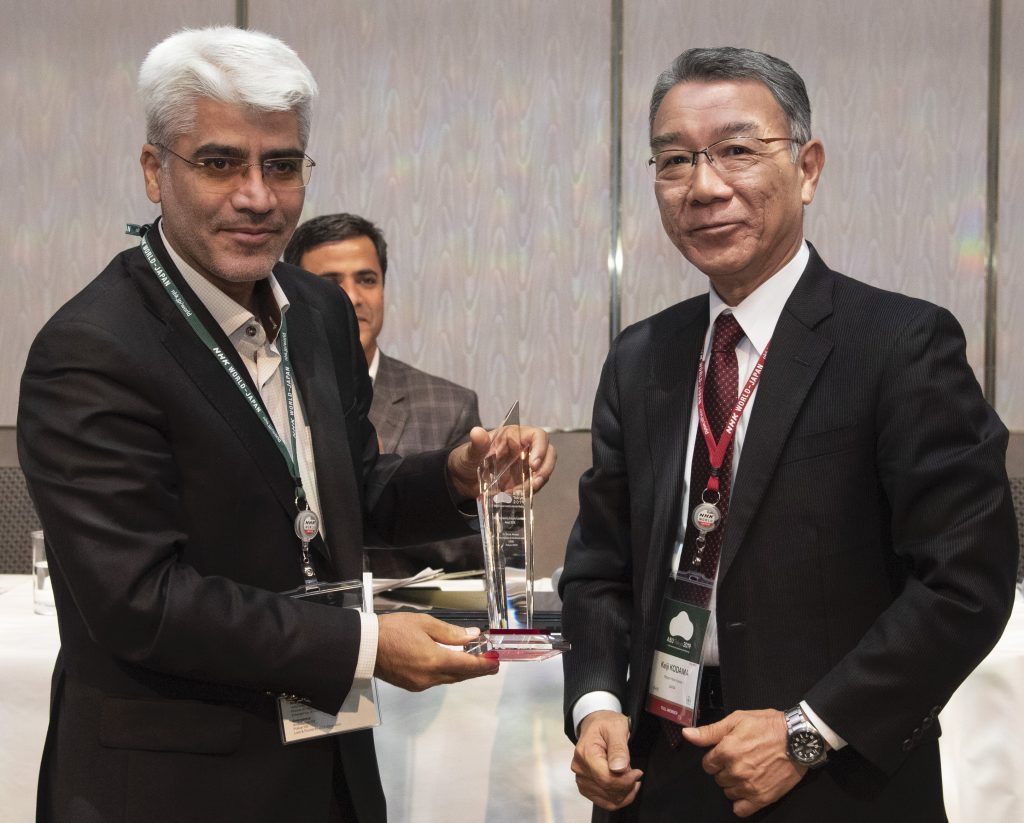 The winner of the 2019 ABU Engineering Industry Excellence Award was Dr Reza Alidadi, Technical Vice President of the Islamic Republic of Iran Broadcasting, for his outstanding leadership and innovative contributions in the development of the radio and television industry in Iran. 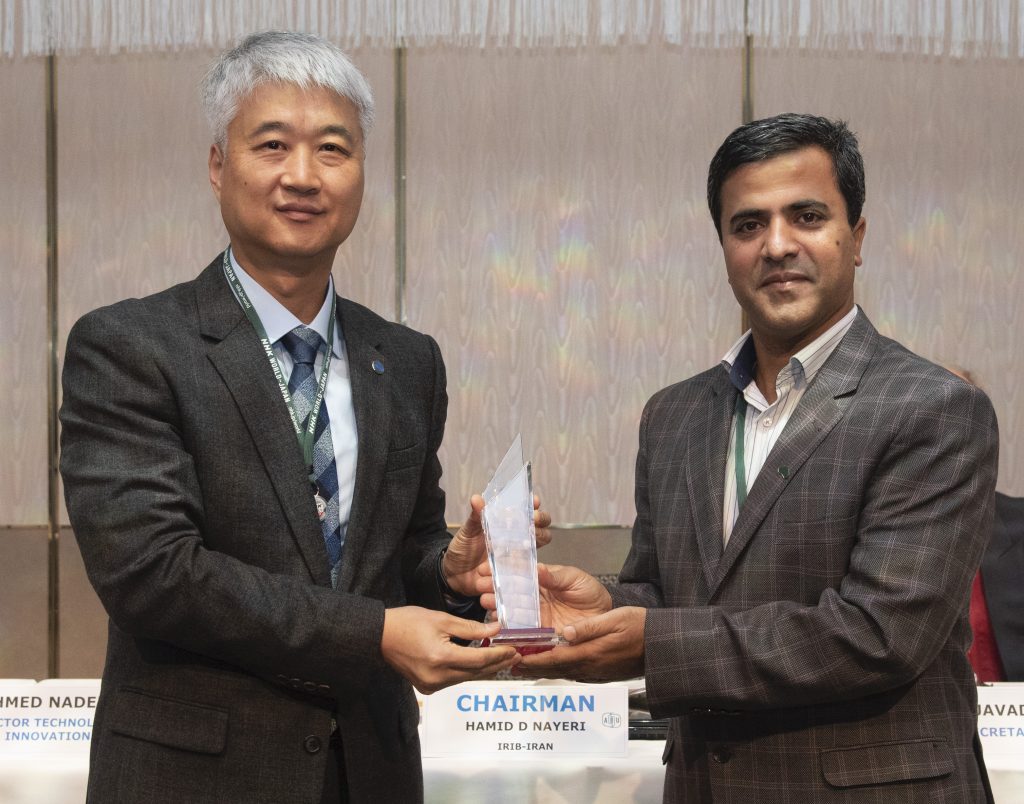 The winner of the ABU Broadcast Engineering Excellence Award is Mr Lee Chang Hyung, Technology Executive Managing Director, Korean Broadcasting System for his outstanding leadership in establishing the digital broadcasting technology plan and his contributions in the digital transition in Korea. 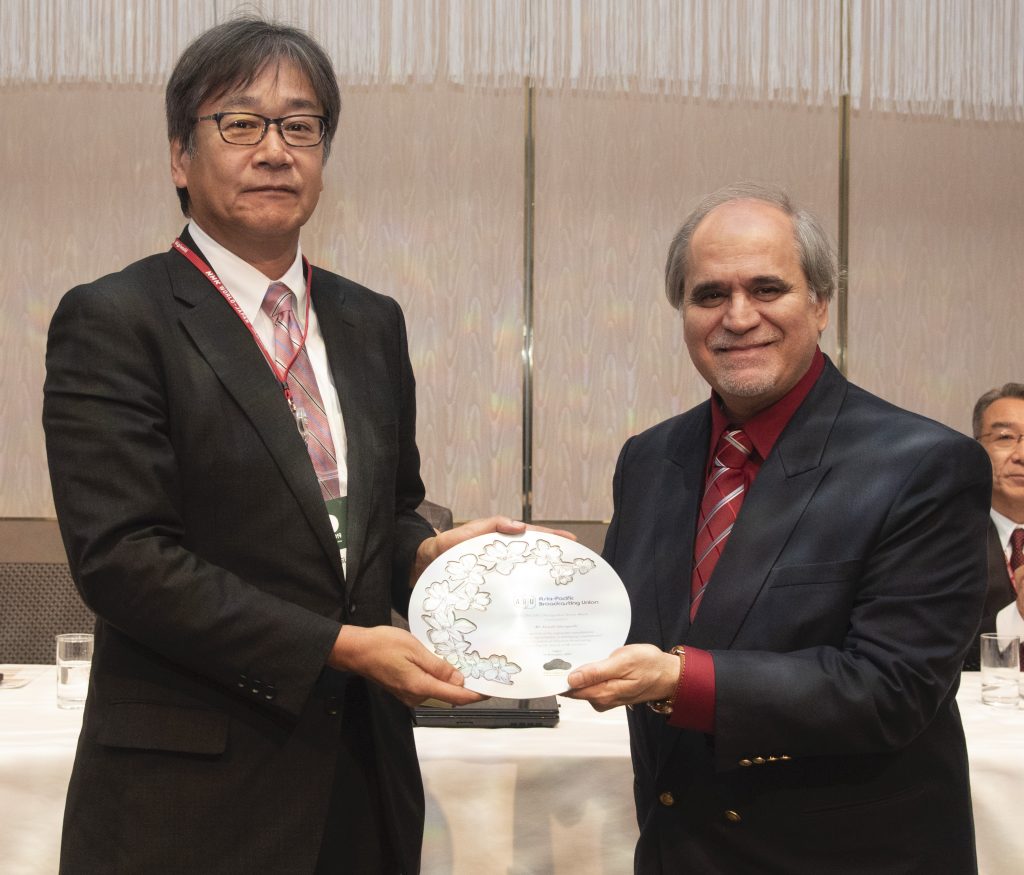 The award was bestowed on Mr Haruguchi in recognition of his important contributions to the development of television broadcasting, including the launch of 8K television.

He contributed greatly to the development and installation of the play-out system for radio, terrestrial and satellite television broadcasting at NHK’s Engineering Administration Department. During this time he oversaw the technical planning of the entire department and contributed greatly to the promotional activity for the digitalisation of terrestrial television broadcasting in developing countries.

Mr Haruguchi was the Director of the Engineering Administration Department from 2014 and the Deputy Chief of Engineering from 2016, contributing to the launch of the world’s first 8K television from December last year.